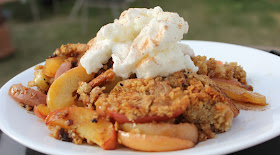 Here is the recipe that is being featured in The Hinton Voice this week.  It is still incredibly surreal seeing my recipes in print!  I absolutely love the first Thursday of every month!  :)
Now that its quite nice outside in the mornings, I have started reading my paper on the deck with a cup of coffee - it's a few moments of Zen before my crazy day begins. 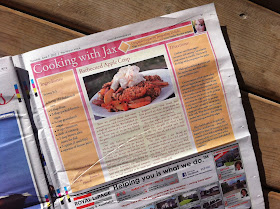 [There are several things that mean summer to me - and of course barbecuing is high up on that list.   We embarked on our first barbecue of the year a few weeks ago.  Some may say we are way behind the game… and they would be absolutely correct.
Our only barbecue uses charcoal, which, unlike a propane barbecue, can’t be turned off when you are finished using it - you have to wait for the coals to burn out.  Because the barbecue stays warm long after you’re done cooking, my husband and I are always trying to come up with new things to grill during the barbecue’s downtime (i.e. after dinner).  Last year we grilled a flat of tomatoes that we had intended to be made into a spaghetti sauce.  That would have been great if we didn’t forget about the aforementioned tomatoes until they were charred to a crisp – lesson learned.

The other night, after the steaks were grilled, my husband threw a couple of apples onto the grill.  He sliced a hole in the top and sprinkled each with cinnamon, olive oil, and a dash of sugar.  They were delicious!

The next night I was slicing up potatoes to be placed in a foil pack for yet another barbecue when it occurred to me to try apples the same way.  Well one thing lead to another, and the next thing you know, fresh apple crisp was in a neatly wrapped foil pack ready to be throw on the grill.]

Combine oats, flour, sugars, cinnamon, and nutmeg.  Cut in butter until mixture is crumbly.  Toss bowl in the fridge while you prepare the apples.

Wash apples and pat dry.  Core and slice apples, then toss them with a squeeze of lemon juice.

Cut two squares of foil (about a foot each) and lightly butter the center of each piece. 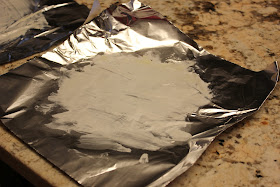 Place the apples onto of one of the foil pieces and then sprinkle with the crumble mixture. 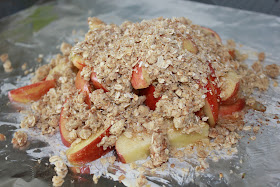 Place the top piece of foil (butter side down) on the package and crimp the edges inwards (about a cm) one at a time until the package is well sealed. I usually do about three crimps per side to make sure it’s sealed really well.   Wrap the entire package in another layer of tinfoil - this will help prevent burning around the edges. 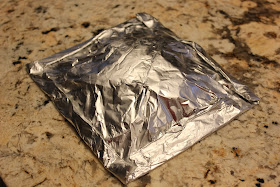 Place the foil pack on the grill (pre-heated to a medium heat – about 350 degrees) for about 20 minutes. 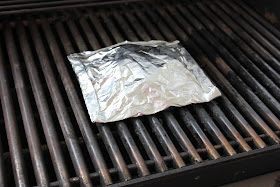 Let cool a minute or two before opening, as the contents will be very hot. 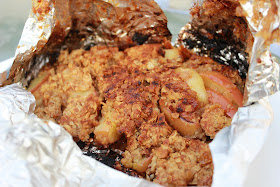 Serve with a scoop of vanilla ice cream and a dash of cinnamon. 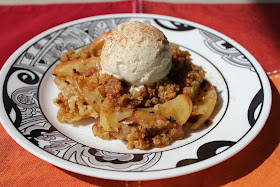